The weather here has been bitter, at least for us in the north part of California. Nearby Truckee, on the other side of “The Hill” was reporting lows of -24F, and that’s too cold for anyone. Around here, on the west side of Donner Pass, we were into the low twenties overnight.

As the weather began to moderate slightly, I was hoping to get “The Hussy” – my Model T Ford, out for a bit of a drive as the afternoon temperatures were up into the fifties, although the ground temperature was such that there were patches of unmelted ice everywhere.

The poor old girl, now 94 years old,  just wouldn’t start. I checked the battery and there was enough voltage showing and then remembered the old trick of jacking up one of the rear wheels. “What?” I hear you saying.

It turns out that the cold oil in the pan, which is shared with the transmission, is thickened greatly when it’s cold. The main drive line is connected directly to the engine through a series of clutch plates and these are now married because of the thick oil. When you jack up one of the rear wheels the drive line can turn freely: motor-clutch-driveline-differential-wheel. So simple but I had forgotten the principle. Freeing one wheel allows everything to turn.

Perhaps what I really needed was this conversion: 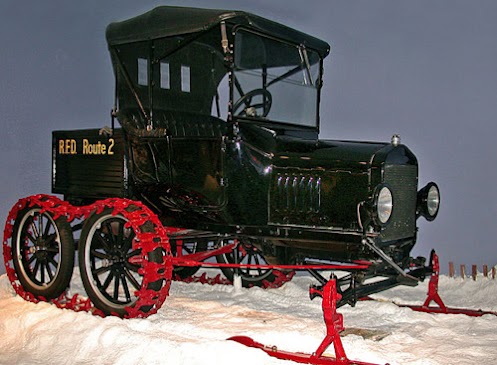 The Model T folks were nothing if not inventive.

So now you know. If your Model T is having difficulty starting in cold weather, jack up a rear wheel and try again.