The Great Basin and the Lincoln Highway – Ruth, New Ruth, and Big Mining

This is not an editorial piece about mining. I just found/shot some great photos and discovered some interesting history in this area.

The large mining operations here near Ruth, Nevada, just west of Ely, have been going on for a century.  The Lincoln Highway passed through Ruth in the early days and then over Jake’s Summit, but expanded mining means that the east side of the pass is now mostly inaccessible ( and seriously not recommended).

Ruth was a company town for Nevada Consolidated Copper Company, the successor to the White Pine Copper Company. The place boomed with the arrival of the Nevada Northern Railway in 1906 and by the late 1920’s had 2,300 inhabitants.

In the mid-fifties the town was closed by the present owner Kennecott Copper Corporation and many of the houses were moved. The site was then covered up by expanded deep-pit mining and New Ruth Came into being, about three miles north of the old location.

Sadly the fluctuation in the price of copper caused repeating bust and boom cycles, and mining in Nevada is often hit hard. New Ruth has not recovered from the last downturn although mining has resumed. The store closed back when gasoline was $1.69 (just when was that?). There are two bars and a post office, but many of the residences are vacant.

Hauling from the Big Pit

Everything about modern mining is big. This is the haulage road near Ruth from a pit somewhere just out of view. Trucks rumble up and down the road at all hours. 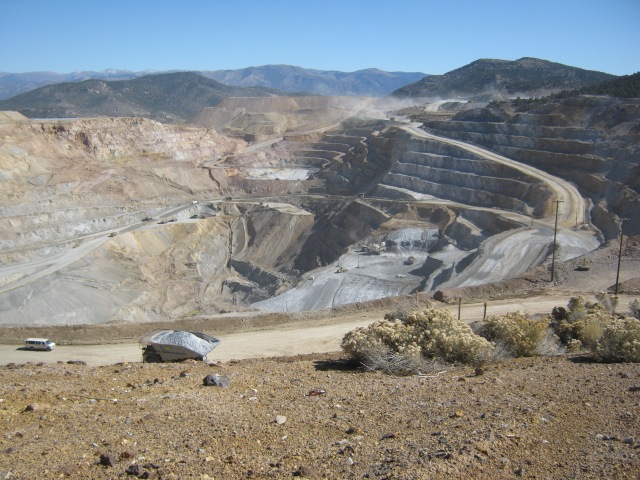 You may visit the Liberty Pit where there is a nice overlook. It will amaze you. Take the road over the bridge just south of Hwy. 50.

Waiting for the Green Light

You will be waiting at the crossing on the way to the pit while the big haul trucks pass, but then you will have an opportunity to really appreciate the size of the equipment.

Here is a short video of the dumping operations.

Finally one “art piece” taken just behind where I took the video.

4 Responses to The Great Basin and the Lincoln Highway – Ruth, New Ruth, and Big Mining